EF – I have been trying to be good about asking people to identify themselves in their own words – just your name, what you do, anything about yourself you feel is relevant to making things.

RD – My name is Ryan Davis, I’m 30 years old. I’m from here, southern Indiana/Louisville, Kentucky. But I think a lot of my creative identity was formed when I lived in Chicago for about five years in the mid to late 2000s.

I run a record label called Sophomore Lounge, I have a band called State Champion that I’ve done since about 2006 or so, and another band called Tropical Trash – those are my main song-based creative outlets, I guess, and a lot of improvised things and random, one-off recorded projects. I also do visual art and design, and a festival every year-ish, called Cropped Out.

I think between those things – the festival, the label, the bands, and I guess the visual art, that’s kind of what I do. And obviously things day to day to make money, but that’s mainly what I do. So, you want to talk about label stuff? Because it’s really up to you, you do a lot of things.

I think in this space for sure it would be a label thing – I don’t write songs down here for the band or anything; if we were to do that, I would take you out to the practice space or my apartment.

I started the label in 2007; I was in Chicago at the time, but this has always been the home base for it. At first it was kind of like, whenever there was overstock it would end up here, and eventually I was living here for a while. Now this is totally the label zone, for sure. 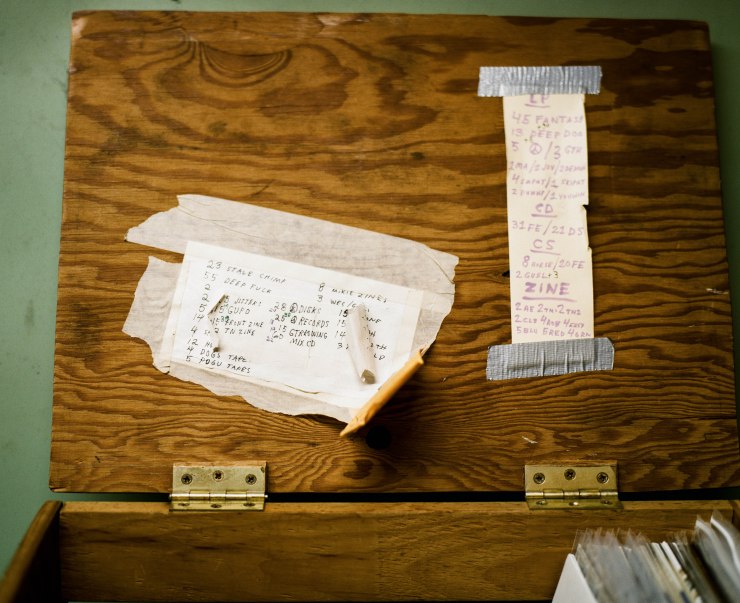 And you were in school when you started the label?

Right as I was graduating college in May 2007 I put out the first collection of State Champion demos, and we kind of threw the Sophomore Lounge label on it just to pretend it was a label. And then we continued with it over the years, and more and more friends would give me stuff that didn’t really have a home elsewhere and we kept calling it that. And eventually the CDRs turned into real CDs, which turned into vinyl and tapes and zines and everything else, and this basement has been the home for that ever since.

It went from that to me eventually kind of seeking people out. But it’s never been a thing where I really sought people out much. It was always close friends and people I met on tour who helped me out. It was never like scouring bandcamp pages or myspace pages like “I gotta find the next big thing.” It’s always just been people who kind of felt like they clicked with the family…and I’ve tried to keep it within that spirit the whole time. 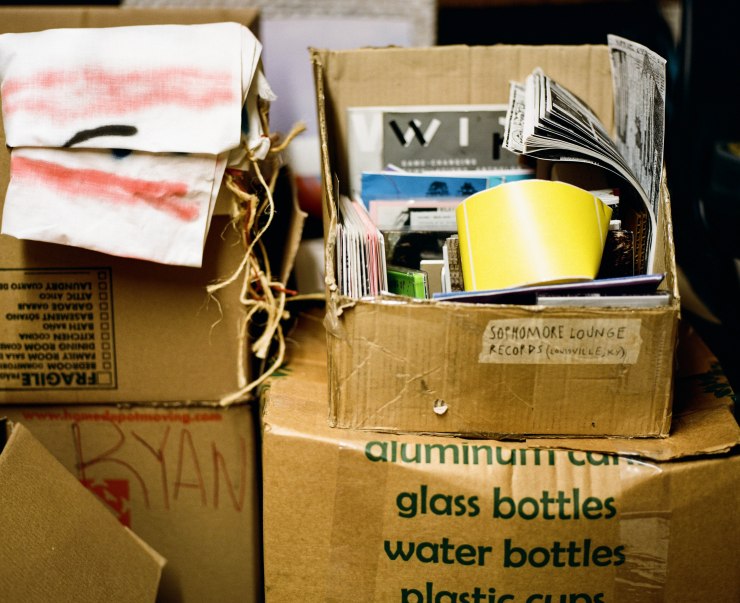 This is actually a somewhat clean version of this basement, it’s been in total disrepair a lot of the time, but everything is at least kind of boxed up…you can’t even really tell what most of this shit is; it’s all records, though. I kind of wish it were more of a mess.

I’ve had the same paper cutter for over a decade which is crazy – you were talking about picking an object – I think that would be the one that… Mikie, my bandmate and one of my main collaborators, his mom is a photographer in Iowa and she does wedding and graduation photography, and she donated this to us like nine years ago or something. This is the only thing that I feel like I would save in a house fire. It’s not even expensive, it’s kind of a piece of shit. But any download code, any cd case, any thing we’ve ever done DIY style we’ve used this thing. It’s not the prettiest object to photograph. Running a DIY label, you think about all the really creative elements of it but this is what it comes down to – just fucking cutting things all the time. This is actually what I use more than anything.

I don’t know if you want me to hold this thing, it’s just such a non-engaging object.

Also, the sleeping bag behind you is probably another object that should be photographed. I’ve had that thing since I was like 11 years old or something. I’ve slept in so many yards and houses and barns and cars – and that thing, probably even over the paper cutter actually, would be my number one thing. It’s barely even held together.

Ryan Davis runs Sophomore Lounge Records and plays in State Champion and Tropical Trash. He was photographed in his parents’ basement in southern Indiana at 2:30am on February 20, 2016.